New solutions to the problem of urban deliveries were high on the agenda at the CV Show which opened today at the National Exhibition Centre in Birmingham.

Hybrid vehicles as well as pure electrics were on display lead by Ford with its plug in hybrid which is currently being trialled in London. It also displayed a new last mile delivery concept involving bicycle couriers working in tandem with a van service using smart technology. 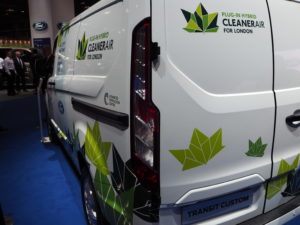 The plug-in hybrid Transit is designed to have a zero-emission range of 31 miles and used the EcoBoost 1 litre petrol engine as a range extender. It uses a geo-fencing system that is capable of modifying vehicle settings based on location.

There are a total of 20 PHEV Transits being used for the trial which is being supported by a £4.7m grant from the government funded Advanced Propulsion Centre.

Ford also launched a new Fiesta Sport van at the show with a one cubic metre cargo capacity and payload of 500 kilos. 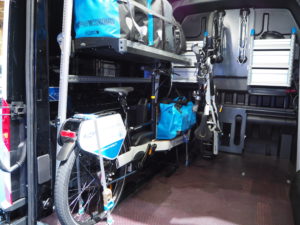 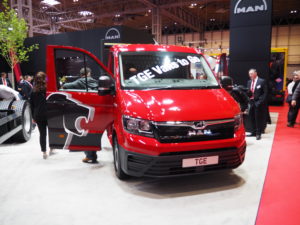 MAN was the only big truck manufacturer to exhibit at the CV Show but it also had its new van on display.

Ford is also adding cellular-based connectivity across its product line-up. Currently it is available on the Transit Connect and Fiesta Sport. FordPass Connect turns the vehicles into mobile wi-fi hotspots with connectivty for up to ten devices. The system gives vehicle health alerts, vehicle status such as fuel levels, remote door locking, and vehicle location.

Renault had on show its new Master Z.E. which it says aims to be the perfect solution for urban last mile deliveries, offering a balance between range, payload and charging time. Orders are due to open later in 2018 with deliveries following in the winter.

Transdek showed its Wedge trailer which as just won a Queen’s Award for Enterprise: Innovation.

The 4.95m Wedge double decker offers 52 pallet capacity. Transdek says it can handle 25 per cent more volume and up to 40 per cent more payload than a conventional double decker. Transdek chief executive Mark Adams said: “Our new Wedge trailer is our most innovative product to date, so it’s great to see our efforts recognised on a national level in such a competitive field.”

Tiger Trailers showcased a moving deck trailer designed to increase operational flexibility with easy loading and unloading from the rear and the side. The 13.7m double deck curtainsider has a capacity of 44 pallets or 74 standard cages. 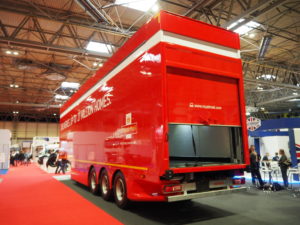 Cartwright unveiled a prototype lifting roof trailer enabling it to accommodate 95 cages rather than the normal 75 for trailers of its height. The idea is that the roof lifts along with the upper deck slowing enough head room while the lower deck is being loaded. Both then drop down when loading is compete reducing the height of the trailer from 16 feet to 14ft 9in. The company reckons it can produce a fuel saving of five per cent. Road trials are about to begin.