British Formula One driver Lewis Hamilton has won the DHL Fastest Lap Award 2015 for the second time. The ceremony, which took place at the 2015 Formula 1 Ethihad Airways Abu Dhabi Grand Prix, recognised Hamilton’s success in securing the fastest lap in eight races during the 2015 FIA Formula One World Championship season. 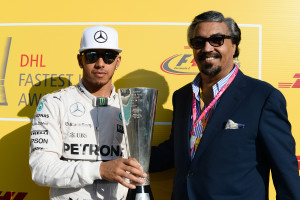 Hamilton said: “I am delighted to have won the DHL Fastest Lap Award again in 2015. It caps a phenomenal year for everyone in the Mercedes team. Winning the FIA Formula One Drivers’ World Championship and the Constructors Title, and setting fastest lap eight times along the way – this all reflects the hard work and competitive spirit that define the team.”

Nour Suliman, CEO of DHL Express Middle East and North Africa said: “It’s a great honor to present the DHL Fastest Lap Award to Lewis Hamilton for the second year in a row. Speed and the desire to be first across the line every time are attributes that resonate very closely with DHL, both in our daily business and in our role as Official Logistics Partner of Formula One. Lewis Hamilton’s determination and constant pursuit of excellence are an inspiration to 325,000 men and women in DHL red and yellow around the world.”