The chief executive of Wincanton, James Wroath, has told Logistics Manager that the 3PL will not rule out further ‘bolt-on’ acquisitions after investors and shareholders reacted positively to its “disappointing” aborted bid to buy Eddie Stobart Logistics last year.

On 23 August 2019 shares in Eddie Stobart were suspended, and just over a week later Wroath began his tenure as chief executive of Wincanton on 2 September 2019. Seven weeks later, on 18 October 2019, it was revealed that Wincanton was assessing the merits of a potential combination.

Wincanton pulled its interest on 25 November 2019, citing “financial performance and ongoing liquidity” at Stobart. Indeed, just days after this interview took place the suspension in trading of Eddie Stobart shares was lifted and it revealed it made a statutory loss before tax of £199.8m for the six months-ending 31 May 2019.

“Our board always had Eddie Stobart on the radar,” says Wroath. “We are the UK’s largest listed logistics provider and they were not very far behind us. [When the] share price was suspended it felt sensible for us to look properly at what a coming together might look like.

“We were very interested in the haulage part of the business. We are a huge dedicated transport service provider with a successful general haulage business, but Eddie Stobart’s is much bigger and we were attracted by the idea of running together, having a large dedicated offering and a large shared user haulage offering.”

‘Excited by the potential’

Wroath says that the feedback from the market and shareholders “was very positive” but the expectation was for Wincanton to be “very cautious” and turn Eddie Stobart around.

“That caution that runs through our business meant that it was very difficult. If you look at the publicly available information you will see why it was difficult. During the process it became obvious that they had a liquidity issue too. At that point we decided within the time frame available there was just not enough information that allowed us to really be sure of what we would be buying,” he explains.

“We were disappointed. We were excited by the potential, but we are not going to take an unacceptable level of risk into account.”

Wroath tells LM that what made the process interesting to him as the new chief executive was the market and shareholder reaction to Wincanton considering acquisitions was “probably more positive than we would have expected”.

He also concedes that there are not really other acquisition opportunities out there the size of Eddie Stobart that would be of interest to Wincanton, but he does say that “bolt-on, inorganic opportunities” is something the business will certainly look at as part of the strategy, particularly where Wincanton can build up networks and shared-user networks. 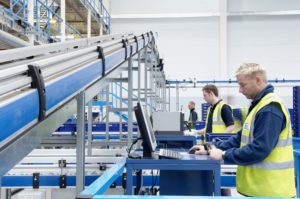 “Although I would never have planned it as my induction route, but it was really interesting as I immediately got a whole load of feedback from investors and shareholders about how they felt about the company. Beyond that I would have just been going around on a roadshow talking, this was an opportunity for me to listen to them about why they like Wincanton and why they invest in Wincanton, with a very live example of what purchasing Eddie Stobart would mean.

“You also get to understand the ambition in the organisation,” he says. “I got a good feel from my leadership team about how energised they were, and they were absolutely energised and up for it to be out in the news about being bold and expansive. Seeing how an organisation reacts live is more interesting than touring around.”

In terms of the overall health of the UK 3PL market, Wroath says that it is in a “very interesting” place.

“I’m not sure about consolidation as the players here in the UK are very big players,” he says. “What is interesting, in a post-Brexit Britain, is how our foreign competitors view the UK market. It is already a tough market to be in, with a very tough local competitor base. It is highly regulated with things like TUPE… I’ll be interested to see how much they want to invest in our market. We have to invest in technology and capital and leases and buildings and if you are a global competitor there is a choice about where to invest. So maybe the UK is not so attractive but looking at Wincanton we are absolutely a UK logistics business for UK companies.

“Hopefully it is a real opportunity for us that we are here, committed to this market and are willing to invest in this market, and our competitors may become less interested in the UK,” he says.

Wincanton group human resources director Sally Austin will be be talking about ‘How to attract talent within the logistics industry’ on Day One of the Automation and Innovation Conference at IntraLogisteX – the UK’s only intralogistics show in 2020 – which takes place on the 31st March and 1st April 2020 at the Ricoh Arena, Coventry. Register your interest now at www.intralogistex.co.uk