Maersk and IBM have launched TradeLens, a blockchain application for global supply chains with the participation of 94 organisations.

The two partners agreed in January to develop the system which uses IBM blockchain technology as the foundation for digital supply chains, empowering multiple trading partners to collaborate by establishing a single shared view of a transaction without compromising details, privacy or confidentiality. 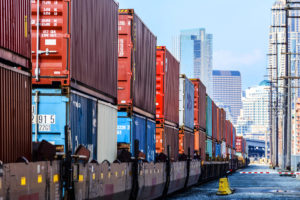 It is intended to be an open and neutral system which enables shippers, shipping lines, freight forwarders, port and terminal operators, inland transport and customs authorities can interact more efficiently through real-time access to shipping data ad shipping documents, including IoT and sensor data ranging from temperature control to container weight.

TradeLens is available now through an early adopter programme, and is expected to be fully commercially available by the end of this year.

Participants in the programme include:

The partners said that during a 12-month trial, they worked with dozens of ecosystem partners to identify opportunities to prevent delays caused by documentation errors, information delays, and other impediments. One example demonstrated how TradeLens can reduce the transit time of a shipment of packaging materials to a production line in the United States by 40 per cent, avoiding thousands of dollars in cost.

“Through better visibility and more efficient means of communicating, some supply chain participants estimate they could reduce the steps taken to answer basic operational questions such as ‘where is my container’ from ten steps and five people to, with TradeLens, one step and one person,” the partners said.

“As a global logistics provider, CEVA sees a unique opportunity in TradeLens, joining forces with IBM, Maersk and other actors from our industry to promote global standards around an open and neutral solution, delivering on the promise of blockchain. It is an important step in our relentless journey to deliver increased value to all our customers and making business flow,” said Christophe Cachat, CIO of CEVA Logistics.

Bridget van Kralingen, senior vice president at IBM said: “Our work with Maersk and other enterprises in the shipping ecosystem has shown that blockchain can be used to form a strong, connected network in which all members gain by sharing important data and that together we can transform a vital part of how global trade is conducted.”

Standards discussions are actively underway with openshipping.org and work to align the TradeLens APIs with UN/CEFACT standards is in progress. The TradeLens APIs are open and available for developer access and feedback from participants in the platform.