MAN officially launched itself into the van market at the CV Show, which opened in Birmingham on Tuesday. 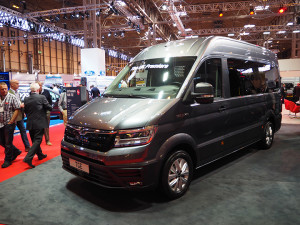 With the new TGE, it is targeting its existing truck customers and emphasising the van’s robustness.

It was described by managing director Thomas Hemmerich as one of the most significant products in the history of the company. The introduction of the TGE means that the MAN range now starts a 3 tonnes and runs right up to 250 tonnes.

The TGE offers up to 18.4 cu m of loading volume and have engines from 102PS to 177PS. At the moment it comes with a manual six speed gearbox, but there are both front-wheel and rear-when drive versions as well as an all-wheel drive variant.

Ford used the show to highlight its new automatic transmission Transit van which is targeted at the multi-drop delivery market. The six-speed SelectShift automatic transmission has been engineered specifically for the Transit and has a new torque converter and external casing to improve refinement, with a torque capacity of more than 415Nm. 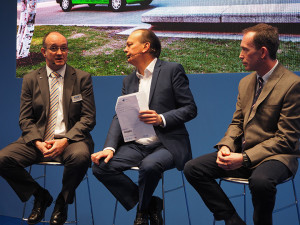 The new transmission can be specified in combination with the 130PS and 170PS versions of Ford’s new EcoBlue diesel engine, with Auto-Start-Stop as standard. 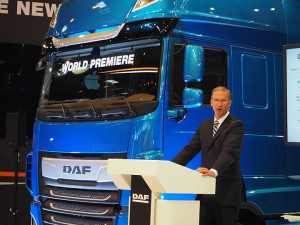 DAF launched its new trucks at this year’s CV show.

DAF is using the show to introduce the new generation CF and XF trucks which it says give seven per cent better fuel economy than the trucks they replace.

The improvement comes as a result of engine innovations, new drivelines and aerodynamic optimisations. The trucks are also some 100 kilos lighter than the old models.

The new trucks will go into production this summer. “DAF has developed a new generation of CF and XF trucks offering the best possible solutions for both the customer and the driver,” said Preston Feight, DAF Trucks president.

A key aim in developing the new drivelines was to reduce engine revs. Maximum torque of the PACCAR MX-11 and MX-13 engines has been increased significantly and is already available from 900 rpm to allow down speeding of the engine. The MX-13 engine produces 530 hp and 2,600 Nm of torque at 1,000 rpm.

TraXon automated gearboxes are standard on the new CF and XF series with the 12 speed being standard and a 16 speed optional. 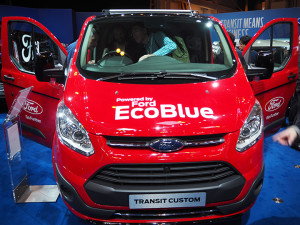 The Ford stand at the CV show in Birmingham.

Vehicle aerodynamics have been improved with a new sun visor design for the CF and XF. In addition, the new XF features wheel bay extensions and flow guides behind the grille for optimal aerodynamics around the truck and through to the engine bay. New grille closures reduce drag, and new gap closures between the headlight and corner deflector realise the best possible aerodynamics.

Tiger Trailers unveiled plans to invest £22 million in a new trailer and commercial vehicle body manufacturing facility at the CV Show. The new facility will sit on a 20-acre plot of land – four times the size of its current Winsford base. The company will break ground on the new site in early 2018, with production to transfer into the new facility later in the year.

Joint managing directors John and Steven Cartwright say the investment will facilitate further expansion as the company grows, while continuing Tiger’s ethos of containing the entire manufacturing process under one roof.

Citroën is showing its new Dispatch XL van. It joins the Dispatch XS and Dispatch M in the van range, providing a load floor length of 2,862mm. The Dispatch XL will accommodate up to three Europallets. There are three gross weight options; 2,830kg, 3,000kg or 3,100kg.

The Dispatch XL is available with up to five different engine and transmission options. BlueHDi 95 versions are powered by a 95hp 1.6-litre Euro-6 diesel engine equipped with a five-speed manual transmission. The range-topping BlueHDi 180 engine, which is also a 2.0-litre, is equipped with a six-speed EAT6 automatic transmission as standard.