After six years in the role, Mark Bolland will be stepping down as CEO of M&S. The announcement arrives as the retailer publishes its third quarter trading statement. 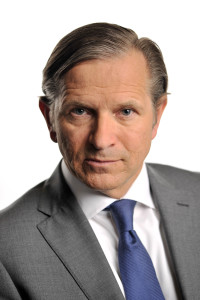 Bolland will remain CEO and on the board until 2nd April 2016, the end of the financial year. Steve Rowe, who is currently Executive Director for general merchandise, will be taking on the role in April.

“It has been a huge honour to lead one of Britain’s most iconic companies. I am delighted to handover to Steve Rowe as my successor. I have worked closely with Steve for six years and I am convinced that he will be a great leader for Marks & Spencer. I would like to thank all my colleagues and the Board at Marks & Spencer for being so supportive of the drive to prepare M&S for the future. I am proud to leave such a large group of talent behind in the business.”

“It is a great privilege to be appointed CEO of Marks & Spencer and to have the opportunity to lead this unique company and all its people forward.”

Marks and Spencer has recorded “disappointing” general merchandise sales in the 13 weeks to 26th December 2015 – with sales down 5 per cent, and 5.8 per cent like for like. It identified unseasonal weather and ‘unprecedented’ promotional activity in December as the main causes for the drop in sales.

The retailer said that although its decision to avoid heavy discounting impacted adversely on sales, it had “protected gross margin” – which the company expect to come in at the top end of the guided range.

The food business had its most successful Christmas so far – with sales up by 3.7 per cent, 0.4 per cent like for like. Food sales were up 17 per cent during the Christmas week.

Online sales increased by 20.9 per cent.

“M&S had an excellent Christmas in Food, delivering record Christmas sales and strongly outperforming the market. General Merchandise sales were disappointing. We continued to prioritise gross margin and held back from the heavy discounting seen across the market in the run up to Christmas. As a result we now expect GM gross margin to be at the top end of the guided range. I’d like to thank all our colleagues for their hard work and great service over the Christmas period.”