Lyreco, the office products supplier, has installed 13,860 solar panels on the roof of its Telford distribution centre. 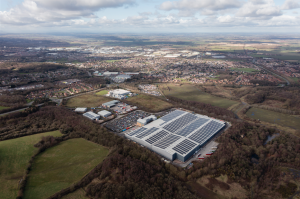 It is reckoned to be the fourth largest rooftop array in the country and is capable of a yearly output of 3.2bGWh, according to EvoEnergy which fitted the system.

According to EvoEnergy, the system will save £53,000 a year on energy bills, and will cut annual carbon emissions by 1,700 tonnes – carbon neutral, in terms of electricity usage.

Nick Dacey, logistics director for Lyreco, said: “We have a large warehouse here in Telford with a large open space on the roof and it recently became obvious that solar panel technology had reached a point where it would be economic for us to engage in that.”