McColl’s has got the go-ahead for its acquisition of 298 convenience stores from the Co-operative Group. It will use Nisa to supply the stores under a deal signed last month. 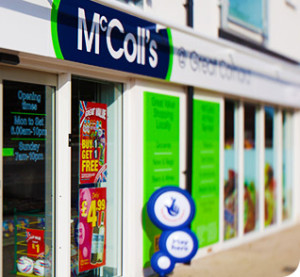 The Competition & Markets Authority has given final and unconditional approval to the £117 million deal which was agreed in July.

It will begin to integrate the stores in late January 2017 and expects all conversions to be completed by the end of August 2017. McColl’s has been moving the focus of its business towards convenience stores and away from newsagents. It said that when the conversion process is completed, convenience stores will comprise over three quarters of McColl’s total estate.

Last month McColls agreed a deal with Nisa to supply the 298 stores it is buying from the Co-op. Nisa has been supplying McColl’s larger stores since 2013. Nisa will begin supplying the first of the new stores in January 2017, followed by a rapid rollout which will see all of the new store portfolio transitioned by June 2017.

McColl’s other stores are all supplied by Palmer & Harvey.

McColls currently has a total of 1,350 stores – 1,000 in the convenience sector and 350 newsagents. Jonathan Miller, chief executive of McColl’s said: “We are delighted that the CMA has approved our acquisition of these 298 quality convenience stores. This is a transformational deal, which substantially accelerates our growth strategy and expands our neighbourhood presence for the benefit of our customers.”

The Co-op decided to sell the stores because they are too small to fit into its strategy of refocusing its store estate on a convenience, own-brand led shopping experience.

In a statement, it said: “The sale proceeds will be re-invested to further deliver the Co-op’s strategy, which over the past 12 months has seen the Co-op become the most frequently visited food retailer in the UK. In the last two years The Co-op has opened close to 200 new stores and in 2016 is actively pursuing 100 new store acquisitions.”