Consumer Products has always been a heavily contested category. This year there were two entries that stood out – Danone Early Life Nutrition and McVities Carlisle, Pladis UK.

Danone Early Life Nutrition’s supply chain team was faced with a significant challenge when the business announced a re-location from Trowbridge, in the south west of England, to London. The resulting loss of 75 per cent of the people from the 40 strong supply chain team created a significant impact, requiring a clear and dedicated focus on safely carrying their unique culture to London and ensuring continuity of business performance throughout the change. 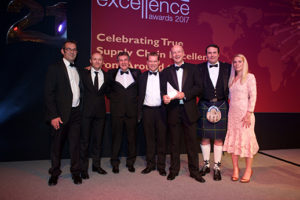 Eighteen months on from the announcement of the move they have built a brand new, high performing team from a strong foundation established by the outgoing team. But the challenge went beyond the supply chain function. Other key commercial activities that they interact with experienced a 60 per cent team change, meaning that the supply chain team needed to head the integral business process and lead other new starters within changed cross-functional teams. The judges appreciated the enormous challenge Danone’s supply chain team faced and the structured approach they took to the problem, but fell short of handing them the trophy.

McVities’ Carlisle site, which was established in 1837, is one of the oldest biscuit manufacturing facilities in the world. In December 2015 Storm Desmond flooded the facility. Remarkably, the site team recovered the production facilities in just four months, and gained full production levels within five months. The team constructed a full flood defence resilience solution by the time of Storm Desmond’s anniversary. The insurers described the team effort as “one of the best recovery operations of its size and complexity seen in the UK”. From April to December 2016 the site regained the full confidence of UK retailers through delivery of a particularly high service level and attainment of BRC Accreditation A+. In addition, the site was also able achieve second place in the Advantage Group Survey of all the major UK retailers and in parallel implemented a business process excellence programme to drive positive engagement and productivity improvement across all functions on site. The judges were truly impressed by McVities’ resilience and its ability to swiftly implement a disaster recovery plan that went beyond just establishing the status quo. They had little difficulty in awarding the trophy for the Consumer Products sector to McVities Carlisle, Pladis UK.