A 4 million sq ft logistics and industrial scheme’s chances for planning approval hangs in the balance as the application goes to committee next week. 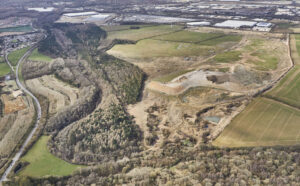 The 200-acre scheme, first put forward in 2018 by Greatline Developments and Mulberry Developments, could provide up to 4.35 million sq ft of employment space for about 7,112 people on land at Cowthick Plantation, Stamford Road, Stanion known as .

East Northampton Council are strongly objecting to the scheme by virtue of increased traffic as well as concerns regarding its ability to secure employment for its own businesses if so many are employed at the scheme.

The application will be put forward to the Development Control Committee on 23 June 2020 with strong recommendation for approval from the council’s own planning officers.

In a document prepared for the committee, planning officers noted: “Officers acknowledge that the building of a logistics proposal on the subject site results in some difficult choices, but taking all factors into consideration with this application, it is considered that the over-riding socioeconomic benefits of providing future jobs in the magnitude offered have been demonstrated to outweigh the loss of the site and any negative aspects.

“The site offered is considered to be highly accessible and appropriate to a logistics use fulfilling locational/accessibility objectives to take advantage of Corby’s geographical advantages.

“Through the development, the application site would deliver significant job creation, apprenticeships and increase in economic output.”