The cranes were produced by, Zhenhua Heavy Industries as part of a £100m contract with Peel Ports. A total of eight ship-to-shore megamax cranes and 22 cantilever rail-mounted gantry cranes are being supplied to Peel Ports as part of the company’s £300 million investment programme to expand and develop the existing Port of Liverpool. 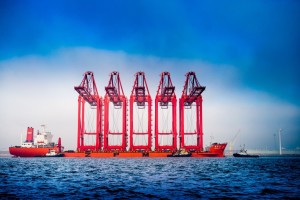 Each crane measures 92 metres high to the top of the frame, approximately the same as Liverpool’s iconic Liver building, and 132 metres high when the boom is raised. Each crane weighs around 1600 tonnes.

Liverpool2 will be able to accommodate the majority of the world’s current container fleet, including vessels up to 20,000 TEU or two 13,500 TEU vessels simultaneously.