Mercadona, the Spanish supermarket chain, is investing more than €120 million in automation for its fresh food at four new distribution centres located in Seville, Valencia, Alicante and Zaragoza.

It has chosen Cimcorp for the automated systems at the DCs which will serve more than 600 of the retailer’s 1630 supermarkets. 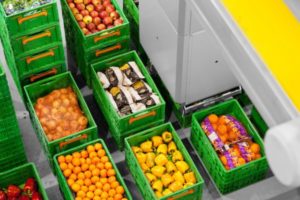 Javier Blasco, warehouse purchasing coordinator for Mercadona, said: “The main objective of these four centres will be to meet the demands of our stores, secure growth in perishable product sales and eliminate the overexertion that results from the manual handling of orders.”

Cimcorp previously supplied automation to Mercadona back in 2013, when it implemented a automated order picking system for fresh produce at the retailer’s DC in Guadix, near Granada. However the new order will be the first time that Cimcorp has acted as system integrator.

All four of the new facilities will have two climate zones for fresh food: +3°C for packed meat products and +12°C for fruit and vegetables.

Kai Tuomisaari of Cimcorp said: “This order will cover several independent automation modules within each DC, and all the automation will be controlled by Cimcorp software, which integrates various technologies into a seamless system. If one module is out of operation for a while – such as when cleaning is performed – the others continue in operation to take care of the material flow.”