Mike Ashley, Sports Direct’s executive deputy chairman and founder, was questioned today by the House of Commons business select committee about allegations of bad practice at the company’s warehouse. 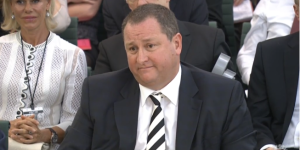 He admitted that workers had been paid below minimum wage and said the problem of not awarding overtime for late clocking off hadn’t been addressed.

Last year Ashley began a review of the company’s employment practices for temporary warehouse and retail staff following allegations in the press and parliament about bad practice.

During the committee session, when asked whether payments below the minimum wage had been addressed the billionaire said: “I hope so”.

Ashley said that the major issue for the company is bottlenecks at security.

Agency worker terms and conditions at the company’s national distribution centre in Shirebrook were also discussed during the meeting. He said that Shirebrook couldn’t possibly have all in-house staff, as it would be “impossible to grow as we’ve grown and take on the people directly ourselves”. He added: “No one could have predicted that online growth requires ten times that of retail”.

The significance of zero hour contracts at the business was also talked about.

The allegations of workers in a warehouse being criticised over a Tannoy system were brought up during the committee meeting. He said that he thought this was a bit of a myth, but that he was not going to say there weren’t cases because “there must have been”. But made clear that the business needs a Tannoy system because it cannot speak to 2,000 people in a warehouse personally.

The “six strikes and you’re out” policy was also brought up by the MPs on the committee. When asked if he thought this system was fair, he said that if it is executed correctly and reasonably then it works.

MPs asked if this would be changed as part of a review, he said that there is always an on-going process of review happening. Adding that he would not want to “commit to 20 things at once”.

Ashley also revealed that he had wanted to buy the recently disbanded retailer BHS.