Marks & Spencer’s supply chains in both Clothing & Home and in Food require significant upgrades, the retailer told investors when it revealed a 62 per cent fall in pre-tax profit for the year to 31st March.

It said that its online fulfilment centre at Castle Donington has struggled to cope with peak demand and some of the company’s systems are dated.

Chief executive Steve Rowe said: “There are a number of structural issues to address and we are taking steps towards fixing these. The new organisation will largely be in place by July and the team is now tackling transforming our culture to make M&S a faster, lower cost, more commercial, more digital business.

“This is vital as we start to leverage the strength of the M&S brand and values across a family of businesses to deliver sustainable, profitable growth in three to five years.”

The retailer has already set out plans to accelerate its store closure programme, which now involves closing more than 100 stores by 2022.

The retailer said: “Although our online sales are growing, our online capability is behind the best of our competitors and our web site is too slow. Our fulfilment centre at Castle Donington has struggled to cope with peak demand and some of our systems are dated. In both businesses we need to revitalise our ranges and reassert our reputation for value for money.

“The website is being improved and we are investing to increase and improve e-commerce capacity, including at our Castle Donington site to support our ambition to double the online share of our Clothing & Home sales to over 33 per cent.

“We are also building a new retail distribution centre at Welham Green. Teams have been established to address the supply chain issues in both main businesses, to deliver a faster, lower cost network.”

Rowe said: “The first phase of our transformation plan, restoring the basics, is now well under way and the actions taken have increased the velocity of change running through our business. These changes come with short term costs which are reflected in today’s results.”

Operating costs in distribution and warehousing were up 3.5 per cent at £538m, “largely driven by by inflation, volume and the cost of channel shift”. 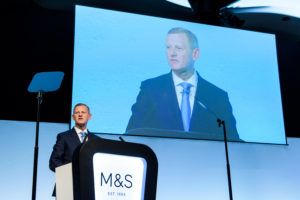 Capital expenditure on supply chain was £23.8 million for the year – down from £34m the year before. The company said this reflected the completion of larger projects such as the Bradford distribution centre in the previous year.

“During the second half we began investment in the new Welham Green distribution centre as we move towards completing our single tier network for Clothing & Home.”

For the year ahead, it said: “In Clothing & Home we expect a year end space reduction of some five per cent as we accelerate our programme to close less productive stores. We anticipate gross margin to be level to up 50 bps, with the first half of the year adversely affected by currency and sale timing.

“In Food, we expect year end space to be broadly level, as we open new Simply Food stores, but close less productive Full Line space. We anticipate gross margin to decrease by between 0 and 50 bps, with the combination of price investment and the annualisation of input cost inflation in the first half of the year.

“We expect UK costs to decrease by up to one per cent, as a result of cost efficiencies and lower depreciation offsetting the costs of new space, channel shift and inflation.

“The effective tax rate on profit before tax and adjusting items is expected to be around 22 per cent.