Zebra Technologies has launched the TC8000, a mobile computer that can increase productivity in the warehouse by between 7 and 21 per cent – at an average of 14 per cent. 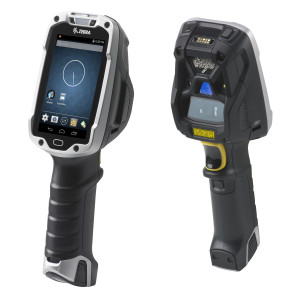 Zebra has said that studies show the removal of an up and down scan tilt action, and adding all touch software to the new product, can save an hour per worker per shift.

He added: “When you look at warehouses going from 1 per cent to 3 per cent in productivity gains, suddenly being able to bring that difference in, is really quite astounding.”

Instead of tilting, the TC8000 enables a warehouse operator to simply hold up the equipment, as all the data capture comes straight out of the back of the device. The traditional “green screen” software found in most warehouse technology has also been replaced with “friendly touch screen buttons” – which means there is no need for a keyboard.

“So suddenly you no longer need the keyboard which is how we managed to free up the device,” said Reed. “You can modify this so that where perhaps you needed three button presses before; it could just be one tap on the screen.” 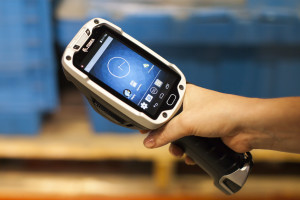 The battery life is 6,700 million powers and is ‘hot swappable’.

“So at any point if the battery is getting low the operator can take it straight out at any time, it goes into a standby mode, its actually still working in the background,” said Reed. “They’ve got up to 2 minutes to put a new battery in, and it carries on, they haven’t got to re-log in to their application again, and they save time, make it easy for them.”

The TC8000 includes large speakers and a microphone so that it can also be used as a walkie-talkie. It also includes a sensor in the back so it can be attached to a trolley, and be used while picking is taking place without being handled by the warehouse employee.

“They can still get all the instructions, but they can then have both hands free to go and pick and item,” said Reed. “You can wave it behind the back of the device and the scanner will automatically come on, scan the barcode, and then you put it in the right location. So again, no need to pick it up and press the trigger to do scanning.”