Ocado is introducing a new radio system to its warehouse automation which will control 1,000 machines in parallel and in real time. 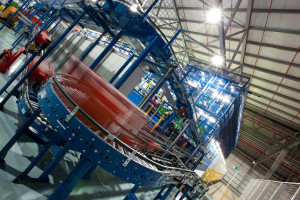 The system, which Ocado reckons is a world first, will control and co-ordinate the movement of hundreds of thousands of crates containing millions of grocery items.

The technology developed by Cambridge Consultants, provides Ocado with a guaranteed connection ten times a second to each of 1,000 machines per access point – all working within a 50-metre radius.

“This revolutionary wireless development work from the Ocado and Cambridge Consultants collaboration is a crucial part of the advanced, proprietary automation which will power our next-generation warehouses and those of our partners,” said Mark Richardson, operations director at Ocado.

“We set out to create a ground-breaking platform for online retailers – the Ocado Smart Platform – to push the boundaries of efficiency, modularity and scalability. Working closely with the Cambridge Consultants team has enabled us to make our ambitious vision a reality.”

The system is based on 4G telecoms technology deployed in the unlicensed 5GHz Wi-Fi band.

“It was clear early on that no technology existed which would do what Ocado needed,” said Tim Ensor, head of connected devices at Cambridge Consultants.

“We created a system based on the principles of 4G but which can support 1,000 devices from a single base station – over ten times more than is usually possible. At the same time, we needed to ensure it met the requirements of operating in licence-free spectrum – the first time this has been done with 4G technology,” said Ensor.

As the technology works in licence-free spectrum, it can be deployed quickly anywhere in the world. As well as logistics, the system could potentially be used to control fleets of semi-autonomous vehicles at sites such as factories, construction sites and airfields. Ocado is the intellectual property owner and has filed a number of patents for the technology.