Renault Trucks and La Poste, the French post office, are testing an electric truck equipped with a hydrogen fuel cell that doubles its range to 200 kilometres.

The 4.5 ton Maxity electric truck will be tested for the next year under operating conditions at Dole in the Jura region. The fuel cell has been developed by Symbio FCell. 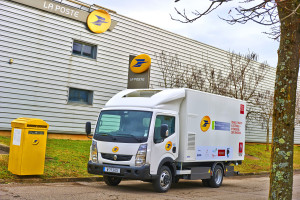 Christophe Vacquier, who supervises the project, said: “When the vehicle is running, the electric motor is fed by two complementary energy sources; the fuel cell is capable of delivering a maximum power of 20 kW and, once that threshold has been reached, the batteries kick in to supply whatever power is still required. When idle, the fuel cell is available to recharge the battery as needed.”

The heat released by the cell is then reused to warm the passenger compartment, which avoids having to consume any energy stored in the batteries, thus helping ensure longer autonomy.

“The formation of water from oxygen in the air and hydrogen stored in the tanks triggers the production of electricity and heat, in accordance with the reverse principle of water electrolysis,” said Vacquier.

The test route in Dole route is mainly rural and covers a distance of some 70 km. The vehicle has a maximum range of 200 km and a top speed of 90 kmph. It has an authorised gross weight: 4.5 tons, certified in France at 3.5 tons + 1 ton, by virtue of special regulations favouring “clean-burning vehicles”.

“Hydrogen stands out today as an efficient solution for extending the possibilities of the electric vehicle product line and its autonomy. More broadly, the development of a hydrogen-based energy storage system is a linchpin to our energy transition”, said Frédéric Delaval, technical director of the mail and package delivery services office at La Poste.