Renault Trucks is to use drones in its axle plant in Lyon to increase efficiency in inventory taking. 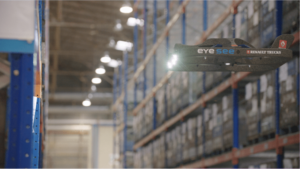 Until now inventory control function at the Lyon Saint-Priest has been carried out manually by an employee using binoculars. The company said this was often tedious and the repetitive non-ergonomic movements involved could sometimes lead to musculoskeletal disorders.

Using built-in mapping features and a predetermined flight plan, the drone reads the barcodes on the pallets using three scanners on its front. It can take an inventory of a location in six seconds, which is ten times quicker than with a manual system.

Photographs are also taken of each location, enabling any issues on pallets to be viewed easily.

“Working with our partner Hardis, we studied the positioning and specific characteristics of our storage racks to draw up a precise flight plan and program it on a tablet. The drone can operate in several hundred locations,” said Vincent Marlinge, Renault’s axle factory manager.

It is also using drones in its used vehicle business to take better photographs of its trucks. The 360º photographs will be available on used trucks e-commerce platform: www.used-renault-trucks.com.