Records management company Restore plc expects to save almost £45,000 after making changes to its fleet as a consequence of introduction of the London Ultra-Low Emission Zone. 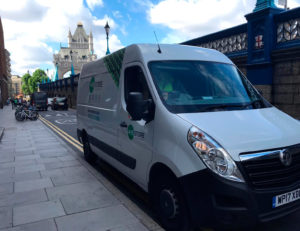 The company has four operating units and national fleet manager Chris Miles is in charge of the 169 commercial vehicles located nationally and serving the division comprising the records management company. It worked with its major vehicle supplier, Days Fleet to mitigate wherever possible the impact of the ULEZ, which was introduced on April 8.

Miles said: “Ahead of introduction of the ULEZ we analysed the fleet and identified 40 vehicles that would be impacted as they operated in and out of eight of the company’s satellite depots around London and would be driven into the zone daily.”

In the first phase of a two-phase strategy, 15-20 vans across the all-Vauxhall fleet comprising Movano, Vivaro and Combo models were identified as due for replacement. Irrespective of location, new Euro 6 compliant vans were all delivered to London depots with non-ULEZ compliant Euro 5 vehicles relocated from those sites to locations outside the capital. Additionally, four new 7.5 tonne DAF trucks were leased to replace older vehicles.

A second phase saw Euro 6 vans already operating from depots outside of London, particularly in the south west of England, relocated to London sites and swapped with Euro 5 models.