Rico Logistics is using ‘cobotic’ technology from Flexi Narrow Aisle to optimise storage capacity in its warehouse facility in Birmingham.

The site now comprises of 11,000 pallet locations and at its highest point – the apex of the building’s roof structure – the new racking scheme delivers a 14 metre high top rack beam. 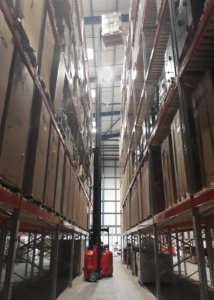 John Maguire, MD at Flexi Narrow Aisle, said: “The Flexi ACiON’s advanced suite of ‘cobotic’ technology is, in effect, connected to the truck’s nervous system and it allows features such as the operator’s vision camera, height selection system and aisle sensing technology, to be integrated without the need for hard-wired relays, contractors and so on.

“This means that far less components are required and, as a result, truck uptime is optimised.”

The trucks are equipped with ‘reverse proximity sensors’ that provide a clear audible and visual indication when approaching any object, especially useful when manoeuvring at rack aisle end.

The Flexi ACiON will stop if it strikes an object and cannot be operated again until the incident is reported to a line manager, ensuring that incidents do not go unreported.

Flexi say that in the future new ‘cobotic’ sensors that aid safe driving, may eliminate the need for barriers in the rack system allowing the user to concentrate in providing safety guards to separate pedestrians from truck operations.

“Some of the most serious incidents of rack collapse within warehouses occur because truck operators fail to report collisions and the damage caused goes unnoticed until it is too late. The Flexi ACiON’s ‘in-aisle impact sensor’ system and cut-out feature mean that at Rico there is absolutely no chance of aisle impact being overlooked,” Maguire added.

Flexi Narrow Aisle is exhibiting at IntraLogisteX – the UK’s only intralogistics show in 2020 – which takes place on the 31st March and 1st April 2020 at the Ricoh Arena, Coventry. Register your interest now at www.intralogistex.co.uk