Scania has secured a small but steady initial supply of engine blocks that make up the foundation of the V8s built in Södertälje, Sweden as the company begins to shift its backlog of truck and industrial and marine engine orders after a strike at one of its main casting suppliers caused delivery and orders to stop. 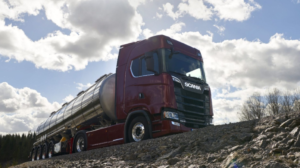 “This is probably the worst disruption that has hit our company in many decades when it comes to supply disturbances,” said senior vice president, head of Scania Trucks Alexander Vlaskamp. It will take some time for Scania to deal with production disturbances of such magnitude, which also came as it was busy with production of V8 units.

“There will still be uncertainties for some weeks before we have the whole picture and can ramp up our production,” said Vlaskamp. “But we are starting now, and will increase gradually with the aim of confirming a correct delivery schedule during the next few months for existing orders. We will successively open up for new orders.”