Robot technology caused a stir on the pavements of London today when a Starship Technology robot arrived at the Logistics Manager offices to collect a parcel.

Alongside two escorts, the robot, which is part of a trial with Hermes, arrived to collect a parcel which was then transported back to Hermes’ London depot. The technology is currently being tested in a number of locations in South London, including: Greenwich, Dulwich, Lewisham and Southwark. 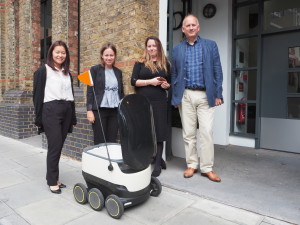 What if someone kicks the robot or picks it up? Well, as the technology includes a range of cameras, criminals will be recorded by the robot, if they’re not put off by the alarm first.

The robots are monitored from a control centre, but eventually, Starship aims to have one person overlooking 100 of the autonomous delivery vehicles. If the robot comes across a problem it can’t solve, i.e. struggling to fit through a gap that’s too small, it will call a human and manual help can be provided. 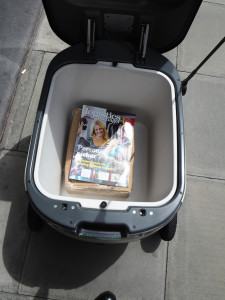 The company is also trialling for Just Eat in the UK.

The robots will be available to deliver packages, groceries and food 24/7, and customers will be able to track it from their mobile phones.