Ocado was forced to cancel thousands of customers’ orders following a fire at its largest fulfilment centre in Erith, south-east London, on Friday night. An Ocado ‘tweet’ at 18:04pm on 16th July read, “We’re really sorry. Due to a major incident at our Erith warehouse some of our orders have been cancelled.”

Around 15 fire engines and 100 firefighters tackled the major blaze, which was reportedly sparked after two robots collided, with the London Fire Brigade in attendance urging people to “avoid the area”. A further message from LFB read, “The fire at the Erith warehouse is very deep seated and firefighters are going to be at the scene throughout the night.”

“The incident at our Erith CFC [customer fulfilment centre]appears to have been caused by the collision of three bots on the grid resulting in a fire,” the company later revealed in a statement.

“The correct protocols were successfully implemented including the evacuation of the building, the activation of the sprinkler system and the presence of the London Fire Brigade. No one has been injured and all colleagues on site are safe. The damage is limited to a small section of less than 1% of the grid having been contained by planned fire attenuation measures.” 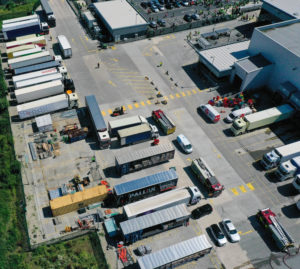 This is the second fire involving robots at Ocado, after its Andover facility burned down in 2019 after an electrical fault with one of its +1,000 AMRs.

Shares in the company slipped by about 3% in early trade on Monday.

Ocado handles up to 150,000 orders a week at the Erith warehouse.

“Aside from some residual smoke smell, the vast majority of the CFC is in good condition. While we expect some disruption to operations, we are working to restore normal service as soon as possible,” Ocado announced.

“We would like to thank the London Fire Brigade and all the other emergency services for their hard work and professionalism in dealing with this incident.”