It’s time to celebrate all that’s best in supply chain and logistics at the industry’s night of the year – the Supply Chain Excellence Awards. 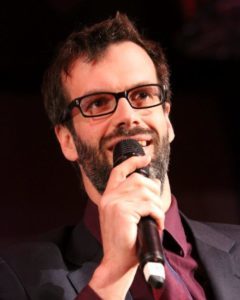 It’s a prestigious black tie gala evening at the Park Lane Hilton in London with more than 600 Supply chain professionals making for perfect networking opportunities. And this year it is hosted by Marcus Brigstocke – one of the UK’s leading comedians.

It’s said that Marcus is heard on Radio 4 more frequently than the shipping forecast. On television Marcus launched The Late Edition, the late night BBC4 answer to The Daily Show with Jon Stewart. He has hosted and appeared as a panellist on Have I Got News For You, and played King Stupid in Stupid on CBBC.

On the big screen he has appeared in Love Actually, Piccadilly Jim, Telstar: The Joe Meek Story, and Beyond The Sea. He played King Arthur in the hit Monty Python musical Spamalot. He’s even appeared on a No.11 chart ‘hit’ with DJ Dee-Kline – a logical progression from his very brief early career as a podium dancer.

Entertainment includes a casino with tables such as blackjack and roulette – all just for fun, of course. A dance floor also opens up after the Awards ceremony for guests to let their hair down.

The Supply Chain Excellence Awards take place on the 6th November 2018, so make sure you get your tickets today.