Platoons of autonomous trucks have started their journeys across Europe as part of the European Truck Platooning Challenge – they are due to arrive in the Port of Rotterdam tomorrow afternoon (6th April). 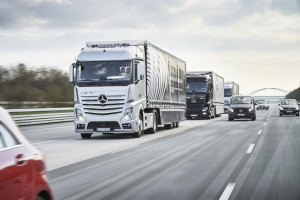 Three Mercedes-Benz Actros trucks have set off on the platooning challenge.

The trucks in a platoon use smart technology, and communicate with each other to maintain their stations in close proximity on the road reducing fuel consumption. The development of platooning could also open the way to automated driving and smart mobility.

A total of six truck manufacturers are taking part in the challenge: DAF, Mercedes Benz, Iveco, MAN, Scania and Volvo.

The truck platoons are all departing from their home bases or production locations.

Scania has the longest journey, as it is leaving from Södertalje, south of Stockholm, driving through Sweden, Denmark and Germany to Maasvlakte II in the Port of Rotterdam, making a stop in Zolder, Belgium and in Zwolle, Netherlands.

Volvo is starting from from Gothenburg, driving through the same countries, and stopping in Vilvoorde.

MAN is starting from Munich in southern Germany.

Iveco is departing from Brussels.

And the DAF convoy is leaving from its production site at Westerlo in Belgium.

Daimler is starting from Stuttgart. Dr Wolfgang Bernhard, responsible for Daimler Trucks & Daimler Buses in Daimler’s Board of Management, personally bade farewell to the drivers at their departure from the Mercedes-Benz museum for their two-day trip.

“With our autonomous and connected trucks, we are pleased to participate in the European Truck Platooning Challenge initiated by the Netherlands,” he said. “I wish our drivers to have a good and successful trip on their way to Rotterdam.

“We consider platooning as meaningful part of the integrated approach in which all stakeholders in road transport contribute to reduce fuel consumption and CO2. Driving in a convoy is one of numerous examples to raise the performance of goods transport extensively with connected trucks. Today already 365,000 commercial vehicles of Daimler are connected. We are consequently pushing this development.”

The tour of the three Mercedes-Benz trucks leads from Stuttgart over Heilbronn (A81) on the highways A61 and A67 across the federal states Baden-Württemberg, Rheineland-Palatinate and North Rhine-Westphalia towards Venlo for passing the border to the Netherlands.

Connected vehicles in a platoon require a distance of only 15 instead of 50 metres between them producing a significant reduction in aerodynamic drag – comparable to slipstream riding in cycling competitions. In this way a platoon of three trucks can achieve a fuel saving of up to ten per cent, reducing CO2 emissions in the same measure. Platooning allows much more efficient use of the road space

The platooning challenge is part of a focus on transport by the Netherlands for its presidency of the EU. It is also making smart mobility the central theme of the Informal Transport Council during the 2016 EU Presidency.