The government has finally published its detailed proposals for the future trading relationship between the UK and the European Union which, it says, would preserve the UK’s and the EU’s frictionless access to each other’s markets for goods.

It proposes a free trade area that would “protect the uniquely integrated supply chains and ‘just-in-time’ processes that have developed across the UK and the EU over the last 40 years, and the jobs and livelihoods dependent on them, ensuring businesses on both sides can continue operating through their current value and supply chains.” 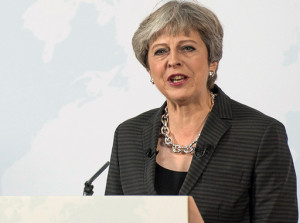 In her foreword, prime minister Theresa May accepted that pragmatism and compromise would be needed to get a deal done. She said the UK approach would also “meet our shared commitments to Northern Ireland and Ireland”.

The white paper entitled “The future relationship between the United Kingdom and the European Union” sets out a plan for a common rulebook for goods including agri-food, covering only those rules necessary to provide for frictionless trade at the border – meaning that the UK would make an upfront choice to commit by treaty to ongoing harmonisation with the relevant EU rules, with all those rules legislated for by Parliament or the devolved legislatures.

It would also include participation by the UK in those EU agencies that provide authorisations for goods in highly regulated sectors – namely the European Chemicals Agency, the European Aviation Safety Agency, and the European Medicines Agency – accepting the rules of these agencies and contributing to their costs, under new arrangements that recognise the UK will not be a Member State;

There would be a phased introduction of a new Facilitated Customs Arrangement that would remove the need for customs checks and controls between the UK and the EU as if they were a combined customs territory, which would enable the UK to control its own tariffs for trade with the rest of the world and ensure businesses paid the right or no tariff, becoming operational in stages as both sides complete the necessary preparations. 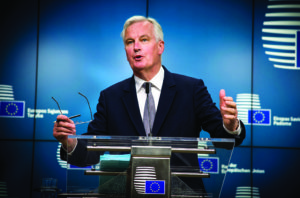 It said that in combination with no tariffs on any goods, these arrangements would avoid any new friction at the border, and protect the integrated supply chains that span the UK and the EU, safeguarding the jobs and livelihoods they support.

There would also be new arrangements on services and digital as well as new economic and regulatory arrangements for financial services.

EU Response
The European Union’s chief Brexit negotiator Michel Barnier responded to publication of the white paper with a tweet: “We will now analyse the Brexit White Paper w/ Member States & EP, in light of EUCO guidelines. EU offer = ambitious FTA + effective cooperation on wide range of issues, including a strong security partnership. Looking forward to negotiations with the UK next week.”

The Freight Transport Association said the white paper offered encouragement for those tasked with keeping the nation’s complex supply chain moving freely, but will require a similar level of imagination and optimism from the UK’s European trading partners.

Deputy chief executive James Hookham said: “Today’s white paper includes positive proposals for many areas which have caused concern for the logistics industry, and should give businesses, which have been worried about a lack of clarity over future trading arrangements, some level of reassurance. It is now Europe’s turn to step up and deliver a similarly supportive, encouraging plan which will minimise the barriers to continued frictionless trading arrangements the UK leaves the EU.”

However, Hookham is concerned by a lack of clarity over how road transport will be able to operate in the future – “a permits system is mentioned in passing, but is really not an option if the thousands of vehicle movements which currently happen to and from the Continent and Ireland are to continue with minimal delays. There is no point in having the most facilitated customs agreement in the world if a permits quota means that trucks cannot move goods freely across borders.”

And, he said: “The paper needs to provide more clarity on the status of skilled EU workers after Brexit – with more than 45,000 HGV drivers from Europe currently working in the UK, loss of their working status would leave the industry severely exposed. The framework for the mobility of workers between the UK and EU needs more detailed explanation, to provide reassurance to employers and those relying on continuity of deliveries for the resilience of their own businesses.”

The Confederation of British Industry responded positively. Director general Carolyn Fairbairn said: “The Brexit White Paper reflects much of the evidence that business has been highlighting since the Referendum. This direction is welcome – protecting jobs and investment now and in future should be the guiding star for both sets of negotiators.

“Many of the intentions are reassuring. Seeking a free trade area for goods and a common rule book shows the Prime Minister has put pragmatism before politics and should be applauded.

“Businesses on both sides have been asking for frictionless trade between the UK and EU, and shared rules could go a long way towards delivering that. It is now the EU’s turn to put economics before ideology on these proposals.”

Adam Marshall, director general of the British Chambers of Commerce, said: “Even with the welcome direction of travel in the White Paper, companies still don’t know how they’ll be paying VAT, how they can move people between offices, or whether goods will get across borders with a minimum of fuss. It is incumbent on the two sides to work pragmatically and productively on the nuts-and-bolts detail of the future relationship over the coming weeks, drawing on business experience and expertise.”

UK Warehousing Association chief executive Peter Ward said: “It is pleasing that, unlike some other members of her party, prime minister May appears to be living in the real world and has listened to the needs of the business community. Since the referendum result was announced more than two years ago, UKWA has stressed the need to retain ‘frictionless trade’ with the EU and it appears from today’s document that the Government is attempting to avert any major upheaval in the way goods are traded between the EU and the UK.

“It remains to be seen however, whether this White Paper is a fanciful wish list aimed primarily at uniting a divided government, that will gain firstly the wider support of parliament, the country, and ultimately Brussels, or whether indeed it is purely a starting point for negotiation.”

However Ward was critical of the lack of detail on post-Brexit immigration policy.

“Representing an industry that relies heavily on the contribution of European workers, and already facing an acute labour shortage, it is disappointing for UKWA that the White Paper appears somewhat vague on the UK’s post-Brexit immigration policy,” said Ward.

“While emphasising repeatedly that the free movement of people will come to an end, The White Paper says the detail of a new immigration policy will be published in a separate paper later this year.”

Robert Keen, director general of the British International Freight Association, said: “The proposals on Customs, where the UK is proposing to apply EU tariffs to EU goods passing through the UK, while having the freedom to set different tariffs on goods entering the UK, look complex and untested, something that has already seen negative comment from the EU.

“Other than a facilitated customs arrangement, I suspect that there will be other areas where there will be differences of opinion between the UK and EU.

“Notwithstanding the above, it is the most comprehensive and cogent proposal put forward by the UK Government to date and is a useful basis for negotiation with the EU.

“However, we need to be realistic. It still has to get through parliament, even before the negotiations in Brussels.”