Volvo has taken delivery of its first trainload of cars from China, opening the way for a regular service that is expected to handle about 40,000 cars a year.

The vehicles are transported between Xi’an in central China and Ghent in Belgium – an 18 day journey by rail.

The route between China and Europe runs via Kazakhstan, Russia, Belarus and Poland. Depending on the destination, the journey takes about 18 days. The intention now is to run several round trips a week. 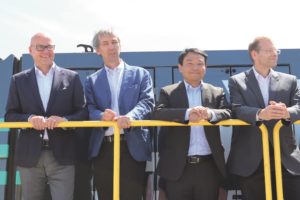 The company aims to be climate neutral by 2025, and has been increasing its use of rail to shorten lead time and lower CO2 emissions.

In its 2018 annual report its said: “Our continued global expansion has meant that the CO2 emissions from transports have increased from 1,136 kg CO2/car in 2017, to 1,389 kg CO2/car in 2018. To minimise this increasing trend, our focus is to look into new transport solutions, including shifting transport mode to greater use of rail.

“For example, in 2018 Volvo Cars began to transport cars from Europe to China via train with a regular service using the international inland port of Xi’an as the hub for distribution of vehicles to dealers in North, West and South China. This reduces lead time and shortens distances for truck transport in China.

ARS Altmann aims to establish covered car transport wagons as a fixed component of transport on the New Silk Road. Frank Lehner, director internationalisation, said: “In recent years, the Chinese automobile market has gained enormous importance for European OEMs. At the same time, the export volumes of vehicles produced in China by international manufacturers and the exports of electric vehicles by up-and-coming Chinese manufacturers are on the rise.

“We are currently in talks with potential customers from Europe and China, but also from Korea and Russia to win them over to the New Silk Road,” said Lehner.