Volvo Trucks have made a new concept vehicle, with an aerodynamic design and lower kerb weight, that it reckons can reduce fuel consumption by over 30 per cent. 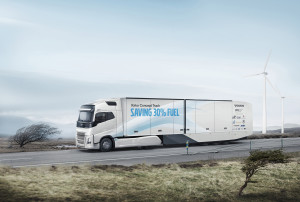 The Volvo Concept Truck delivers a 40 per cent improvement in aerodynamic efficiency which, according to Volvo, has benefited both the tractor and trailer. The trailer weighs two tonnes less than the reference trailer – this results in either lower consumption or the possibility of a higher payload.

As well as this, the truck has newly developed tyres with lower rolling resistance and an improved driveline.

“We’ve modified the entire combination and optimised it for improved aerodynamics as much as possible,” said Åke Othzen, chief project manager at Volvo Trucks. “For instance, we use cameras instead of rear-view mirrors, which cuts air resistance, so less energy is needed to propel the truck.”

The truck is currently part of a research project, so is unavailable on the market – but some of its features have been applied to Volvo Trucks’ serious-produced vehicles, with additional features potentially being fitted in the future.