As the year draws to a close, it’s time to look back on all we have learned in the past 12 months.

As Logistics Manager reporter Michelle Mooney reports in the January 2020 issue, there are huge strides being made in retail and manufacturing supply chains to make business more sustainable. Be it the type of pallet wrap Agility Logistics are using, or the types of plastics that carry case manufacturer Targus is using.

Consumers are becoming wise to the sustainability practises of business. Look back to April when Apple (the first company in history to hit a $1 trillion market capitalisation) said that it has almost doubled the number of suppliers that have committed to run their Apple production on 100% clean energy, which will enable it to exceed its goal of using four gigawatts of renewable energy in its supply chain by 2020.

Apple has such a hold on our digital lives that it could continue to make money for shareholders whether or not it set these goals. But Lisa Jackson, Apple’s vice president of environmental, policy and social initiatives, said of the move “we…hope that our collaboration will show others what is possible” and “we won’t stop driving change within our industry”. Where businesses like Apple lead, others will follow.

There is such a thing as ‘promotion fatigue’

Success during Black Friday may be something to coo about in regulatory announcements to the City, or in a press release to trade publications (I discussed it in my column last week)… but for a lot of consumers they’ve seen that it has become the Emperor’s new clothes of retailing.

Fraser McKevitt, head of retail and consumer insight at Kantar, explains: “The number of people claiming to take advantage of Black Friday this year fell to 53% from 57% in 2018 with signs of ‘promotion fatigue’ among consumers, an increased scepticism regarding the value of the deals on offer and some retailers pulling back from the day all together.”

Planning for Black Friday 2020 will have to take into account customer cynicism.

As the old joke goes…. “How do you know someone is a vegan?”

“They don’t stop talking about it…”

Groan. But the truth is there are more vegans out there. And while the estimate is that 1.16% of grocery consumers are vegan that number continues to grow. It’s not quite at the stage yet where it will bring the meat, fish and dairy industries crashing down… but it is a growing section of society. From my point of view when you hear Fi Glover talking about her vegan Christmas on Radio 4 you know it has made it into the mainstream.

Earlier this year we saw the success Greggs had with its vegan sausage roll. The psychology though is intriguing. A mainstream high street retailer was offering a small section of consumers a personalised product that reflected their values. At the widest view this is personalisation. Each consumer wants their own personal product that reflects them. And they believe they can buy it.

Personalisation will alter supply chains, sourcing and procurement. Retailers that do not develop a nimble enough supply chain to provide each customer exactly what they want will be left behind. Try keeping on top of those SKUs.

All that Brexit preparation was worth doing 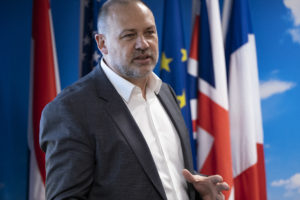 Following the election last week, it appears that the ‘Will they, won’t they” farce of Brexit has reached some form of denouement.  Like it or not, the public have backed ‘Get Brexit done’ and it is up to the Conservative government to delivery successful policies in a post EU Britain.

So with the real work of Brexit beginning now the warning of the FTA’s head of European policy Pauline Bastidon, will be ringing in logistics professionals’ ears: “While the transition period has already been reduced to less than a year, it is vital that the logistics industry understands the new rules and procedures it will need to implement after Brexit, and critically, has time to plan and adapt.”

And let’s not forget that Hendrik Venter, chief executive for Mainland Europe, Middle East and Africa at DHL Supply Chain, told this very publication: “We hope that it is not a no-deal Brexit.

“We can concur with logistics industry experts in the UK that it is going to be extremely difficult for logistics businesses and manufacturers to operate in the case of a no-deal Brexit. We hope there is a solution of a deal that will continue to facilitate international and global trade.”

The election might have given us ‘clarity’ and ‘certainty’ but the sector is not out of the woods yet.

I’ve written about this again and again since I became Editor of Logistics Manager four months ago but, in a nutshell, new technology will transform the way business is done. Simple as that.

The prime example in the UK is XPO Logistics’ 638,000 sq ft DC for Nestle in Leicestershire, UK. The custom-designed DC, scheduled to complete in 2020, features advanced sorting systems and robotics alongside state-of-the-art automation co-developed with Swisslog Logistics Automation. The site’s digital ecosystem will integrate predictive data and intelligent machines to deliver one of the most advanced distribution management centres in the world… and this cutting edge logistics operation is happening in the UK. It’s a fantastic example of what is achievable.

Personally, I cannot wait to see and hear about more such sites in the coming years. If 2019 was a year of consolidation, then 2020 will be a year of delivery.