Airbus has started a six month trial of an Autonomous Mobile Robot at its factory at Broughton near Chester, which makes aircraft wings.

The robot has been developed as part of a UK-government funded collaborative research project, and is designed to handle and transport small aircraft components and assembly tools around the factory. 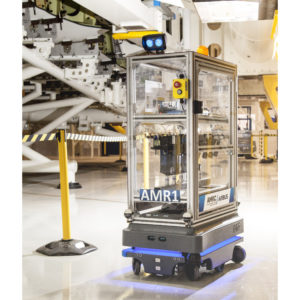 The AMR features smart navigation technology allowing it to develop real-time awareness of its surroundings to operate autonomously and avoid obstacles in its way.

The vehicle builds a real-time 3D picture of the surrounding environment through the use of laser scanners and a pair of cameras to detect low level and overhanging obstacles.

The company said the robot uses a complex set of algorithms to calculate and negotiate a safe route around pre-programmed positions.

“In the future, the capabilities of such vehicles will be developed further to allow automated handling of large components within the factory. In addition, the technology could eventually be rolled-out across other Airbus sites.”