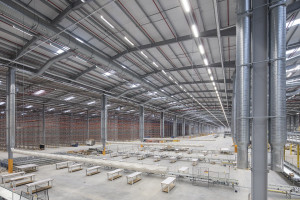 The 500 job roles are in additional of the 3,500 full time jobs Amazon has pledged to create this year.