American Airlines Cargo has moved two sand tiger sharks and three bonnethead sharks from the US to South America. 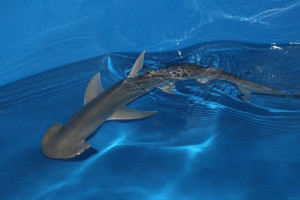 The sand tiger sharks were flown from New York John F Kennedy, while the bonnethead sharks flew from Miami International, all moving to Rio de Janeiro.

All five sharks were headed to their new home at an aquarium in Nova Iguazu, Brazil via two different Boeing 777-200s.

To ensure their health and safety, the sharks were housed in two special shipping tanks that weighed more than two tonnes each.