The army could soon be using autonomous logistics vehicles to deliver supplies to troops in war zones, under a £66 million project to fast-track military robotics projects.

The aim would be to remove soldiers from dangerous resupply tasks so they could focus on combat roles. 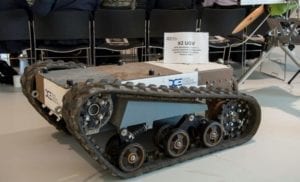 Other elements of the project include systems to fit army fighting vehicles with remote-control capability, so they can be pushed ahead of manned vehicles and used to test the strength of enemy defences; and mini-drones to troops with an eye-in-the-sky to give them greater awareness to outmanoeuvre enemies on the battlefield.

The funding from a £160m transformation fund and will see some of the equipment set to deploy to the likes of Estonia, Afghanistan and Iraq before the end of the year. Defence secretary Gavin Williamson will also look to make a further £340m available as part of a spending review.

Williamson said: “Each of these new technologies will enhance our army’s capabilities while reducing the risk to our personnel and I’m delighted we will be revolutionising frontline technology by the end of the year.”