The government is consulting on proposals for van drivers to have the right to use heavier vehicles if they are electric or gas-powered. 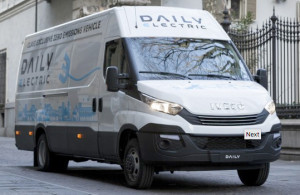 The proposal is that the limit for alternative-fuel vehicles that can be driven on a car driving licence should be increased from 3,500kg to 4,250kg.

This would enable alternative-fuel vans to carry the same weight of goods as conventional diesel vehicles. This is currently a deal-breaker for many organisations, such as supermarkets, whose home delivery vehicles are weight constrained.

Under the current system, a driver needs a C1 category licence to drive a vehicle over 3,500kg. The consultation document, published by the Department for Transport, estimates that this can cost an additional £1,200 per driver, as a result of the cost of licence acquisition, higher salaries, compulsory medical exams, and driver CPC training.

The document points out that other EU Member States, including Germany and France, have already secured a derogation for electric LCVs up to a weight limit of 4,250kg and Germany has recently had the scope of this derogation extended to cover other alternative fuels.

The proposal is to apply for a five-year derogation from the existing regime – after which the situation would be reviewed.

There is currently an exemption from all types of goods Operator’s Licence for electric vehicles.

The latest DVLA figures indicate there were 423 registered electric goods vehicles with a maximum laden weight above 3,500kg in the UK at the end of 2015.It said there is a strong argument for removing the electric vehicles exemption while such vehicles are still relatively low in number, rather than imposing it at a future point on a larger existing fleet.

Consequently, the current proposal is to remove this exemption. However, the DfT said it is considering slightly modifying it by introducing a limited exemption from restricted operator licensing requirements (own-account) for alternatively-fuelled vans not exceeding 4,250kg gross vehicle weight.

The move is part of the a series of proposals that include ending the sale of all new conventional petrol and diesel cars by 2040, to cut air pollution, which, the government says, cost the country some £2.7 billion in lost productivity in 2012.

Transport secretary Chris Grayling said: “We are taking bold action and want nearly every car and van on UK roads to be zero emission by 2050 which is why we’ve committed to investing more than £600m in the development, manufacture and use of ultra-low emission vehicles by 2020.”

The consultation is entitled “Regulatory changes to support the take-up of alternatively-fuelled light commercial vehicles.”

Martin Flach, Alternative Fuels Director at IVECO, said: “Customers are frequently asking us for the supply of low emission light commercial vehicles but 3.5t LCVs are always critical on payload and the loss of payload and limit of the driver license have resulted in the take up of very few vehicles.  IVECO is therefore delighted that the proposal for Category B driving licence derogation for alternatively fuelled commercial vehicles is now open for consultation by Government as this would allow us to kick start the uptake of ULEV vans and consequently improve air quality allowing manufacturers and customers alike the opportunity to make the most of new alternative fuel technology and provide the vehicles that are already available.”

The four-year investment round is designed to deliver a coordinated programme of competitions that will aim to boost both the research and development of expertise in battery technology.

The first element will be a competition led by the Engineering and Physical Sciences Research Council to bring the best minds and facilities together to create a Battery Institute.

The Business Secretary also launched a third Connected Autonomous Vehicles research and development competition, with £25 million of funding being made available to new projects.