Ford revealed the first details of the new Transit Connect and Transit Courier light commercial vehicles as part of its plan to renew its entire commercial line-up in Europe renewed over the next 18 months. 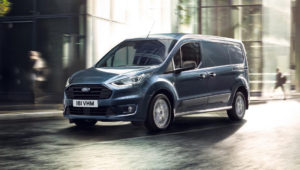 “Ford’s latest Transit family has taken the European market by storm, and we have no intention of taking our foot off the gas,” said Hans Schep, general manager, commercial vehicles, Ford of Europe. “We’ve given our two smaller Transits a complete overhaul that makes them even more affordable to run, more stylish to look at, and ready to tackle every job our customers throw at them.”

The two new Transit models will be available to order in spring 2018 for customer delivery from the middle of the year.

The Connect comes in short and long wheelbase options providing load volumes up to 3.6 cu m (VDA), payload capacity ranging from 520-890 kg, and body styles including van, kombi and double-cab-in-van.

An upgraded six-speed manual transmission is now fitted to all engines as standard. The 1.5‑litre EcoBlue engine can also be specified with an advanced new eight-speed automatic transmission.

The Transit Courier is the smallest member of Ford’s Transit family, and the new model has a refreshed front-end appearance. It offers urban van operators a payload capacity ranging from 500-590 kg, load volumes up to 2.4 cu m (VDA), and a choice of van and kombi body styles.