Ford has unveiled its new Transit Custom one-tonne van which promises improved fuel efficiency as well as a redesigned front end and all new interior. 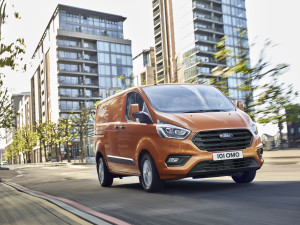 Hans Schep, general manager, commercial vehicles, said: “Transit Custom has been a runaway success since it was introduced, and this new version raises the game once more. We have listened carefully to our customers, and delivered a one-tonne van that is even more stylish, even more productive, and packed with smart features.”

The new Transit Custom is powered by the Ford EcoBlue diesel engine, designed, engineered and built at the Dagenham Engine Plant. It was introduced to the range during 2016 with a choice of 105PS, 130PS and 170PS power outputs. Compared to the previous 2.2-litre diesel, fuel-efficiency is up to 13 per cent better and low-end torque enhanced by 20 per cent.

The updated model now offers a new ECOnetic variant, available for the 300 Series short-wheelbase van, which comes with a 105PS engine with a calibration and Auto-Stop-Start, low rolling resistance tyres, Ford’s innovative Acceleration Control feature, and a fixed 62 mph speed limiter. The ECOnetic variant delivers 148 g/km CO2 emissions and 49.6 mpg, a further six per cent improvement over the most efficient current vehicle.

The cabin interior is completely new, with an instrument panel based on Ford’s new interior design philosophy which has been pioneered on the new Fiesta –offering a user-centric layout that is influenced by consumer interactions with smart devices and tablets.

The new Transit Custom will be available to order later this year, and is scheduled for customer delivery in early 2018.

The new van also sets the scene for Ford’s next major commercial vehicle innovation, with the introduction of the zero-emission capable Plug-in Hybrid (PHEV) derivative scheduled for 2019. The PHEV Transit Custom will begin trials with fleet customers in London later this year.