Hachette UK has opened its 242,000 sq ft Hely Hutchinson Centre near Didcot for the distribution of books of all the publishers within the group.

The distribution centre has 25-metre-high eaves and provides 35,000 bulk locations, including with the capacity to double within the existing footprint. It will dispatch 65 million books and stock 150,000 titles. 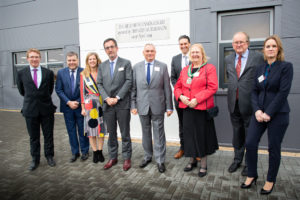 All publishers within UK group plus the third-party publishers distributed by Hachette will be distributed from the site by the end of the second quarter of 2019.

Bookpoint, Hachette’s existing distribution centre in Didcot, will serve as a bulk storage area for the new centre.

The investment includes the replacement of Hachette’s Vista warehouse management and sales order processing systems in favour of modern software solutions from suppliers including SAP and JDA.

“The challenges of our changing market and shifting retail landscape means that our customers want a faster, more complex, bespoke distribution service.  Our response to this challenge has been to build the most advanced book distribution supply chain in Europe,” said chief operating officer Chris Emerson.

“We are very proud of the distribution service we offer our authors, our customers and our client publishers,” said chief executive David Shelley. “The Hely Hutchinson Centre is a sign of Hachette’s present and future commitment to great service and of our ambition to become an even bigger player in print distribution than we already are.”