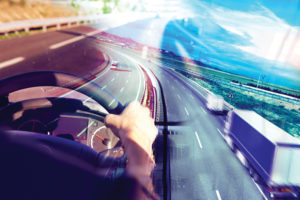 The comments were picked up by “The Times” on 23rd December which said: “Britain’s first national pay-per-mile road charging system is being considered by the government…”

And there have been suggestions that an HGV road charging system could be precursor to a system for all road vehicles in the future – particularly as the government is facing a long term decline in revenue from fuel taxes as electric vehicles become more common.

However, Grayling’s comments seem to relate to a consultation paper on Updating the HGV Road User Levy, which was launched in November.

The government said at the time: “The government will work with industry to update the Levy so that it rewards hauliers that plan their routes efficiently, to encourage the efficient use of roads and improve air quality.”

One of the questions asked in the consultation paper is:

“The current Levy already takes weight and axles into account. In reforming the HGV Road User Levy, should the Government consider a charge based on:

It asks for comments on the use of technology including automatic number plate recognition; tag and beacon; or an on-board system using GPS.

And it also asks if the Levy should be integrated with existing vehicle charging regimes such as toll crossings; future regimes such as clean air zones; and other UK vehicle taxes such as VED.

The consultation is due to close on 26th January. The Freight Transport Association is currently consulting internally on its response. Christopher Snelling, head of UK policy, pointed out that this kind of review of legislation was normal and that this consultation document made it clear that the intention was not to raise more money from vehicle operators.

However, he warned that changing the road user levy into a road user charging scheme would be very complex and disruptive. And he pointed out that an HGV only scheme would not be an effective way to manage road congestion.

“We don’t want something that is more costly, if it doesn’t achieve anything for the road user,” said Snelling.

The Department for Transport also launched a consultation on the Major Roads Network on 23rd December. This proposes that 5,000 miles of A roads should be brought into scope for new funding from the National Roads Fund, enabling key roads to benefit from up to £100m each of funding.

Snelling welcomed the proposed investment but said the government must ensure that any projects funded by this scheme are designed for freight as well as car users.

“Above all, FTA believes any roads classed as part of the MRN must focus on making motor traffic more efficient and be open to all types of motor vehicle without restriction. There should be no HGV restrictions on anything that wants to claim to be a ‘Major Road’.”

The RHA also welcomed the investment plan. Chief executive, Richard Burnett said: “While major roads have often benefitted from investment, ‘A’ roads and local roads have been under-invested in for many years.”