Neil James, former vice president integrated business planning at GlaxoSmithKline, examined the challenges involved in designing a Sales and Operations Planning process, when he spoke on the second day of the Logistics & Supply Chain Conference. 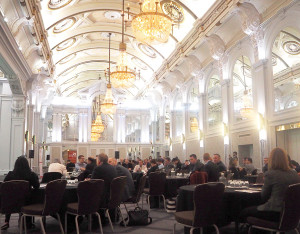 “The most important thing to remember is that, when I kicked off this programme, there was no S&OP process in GSK – you might find that surprising,” said James. “Commercial operations were not even providing forecast of demand – it was left to supply chain colleagues. So we were starting from very low base.”

The company had tried multiple times to implement a process, but it had never managed to really get any plans off the ground. And if processes did manage to jump the first hurdle, they couldn’t be sustained.

In his 20 years at GlaxoSmithKline, James has always worked on the commercial side of the business. It was a deliberate choice to choose someone in a commercially driven role to take over the S&OP process. Previously, the business had seen the process as a supply chain responsibility, rather than a core commercial process.

“Actually it’s really about cross-functional engagement,” said James. “None of them could really go much further than that. All the consultants that peddle their wares, they were from the supply chain side – but the thing that was missing was collaboration.”

James designed a change programme, which still included process expertise, or the tangible and rational elements you need for the process, as an important element. James said that the right design for the process and toolkit are still critical. “They’re the ticket to having S&OP in the first place. Without that you’ve got no chance.”

When looking at the sustainability of the process, James felt that it was a big ask, and felt like a marathon.

“But that wasn’t the right mind-set. The whole point of it isn’t to get it over the line, it needs to run every month, forever, and needs to get better,” said James. “Once we built a network of champions, in every geography, in every unit, we had a champion [of the S&OP plan) in that space.”

The champions are trained so that each GSK unit is a “centre of excellence” when it comes to S&OP.

“In the run up to hand over the deployment to line organisation, we made sure we invested enough time for them that day – contracting with them six months before they take it on themselves.

Another element was senior leadership sponsorship. “Normally in a big company you take one chief person. I took two (and I would have rather had three), the chief financial officer and chief supply chain officer. Why? The whole point is that historically its seen as supply chain responsibility – sponsors reinforce and symbolically show that it’s a core process.”