Commercial vehicles operators  and manufacturers both in and outside of the UK are preparing for one of the biggest shake-ups to the industry in the form of the the Direct Vision Standard (DVS). John Thornton investigates…

Created by Transport for London (TfL), and part of Mayor of London’s Vision Zero plan to eliminate all deaths and serious injuries on London’s transport network by 2041, the DVS measures how much drivers of lorries over 12 tonnes gross weight can see directly through their cab windows to indicate the level of risk the vehicle possesses to vulnerable road users, such as pedestrians, cyclists and motorcyclists. 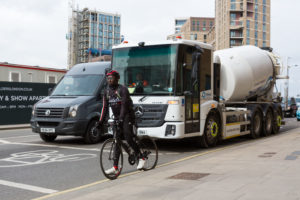 From 26 October 2020, the DVS will operate 24 hours a day, seven days a week, and will be enforced on all roads within the Greater London boundary. Under the scheme, individual vehicles are awarded a star rating between zero (lowest) and five (highest). Vehicles with a minimum one-star rating will be awarded a safety permit, which will allow them to travel freely within London’s boundaries.

However, operators of vehicles rated zero-star will need to improve the overall safety of their vehicle by fitting a so-called ‘Safe System’ to reduce the risk it presents, as well as to avoid a £550 per day fine for non-compliance. And it’s here where the biggest technological changes to commercial vehicles will be felt.

Requirements include a fully operational camera monitoring system, Class V and Class VI mirrors, a side-view camera system and an audible alert linked to close proximity sensors on both the front and back of the truck. There also need to be devices that give ample warning to other road users about an impending manoeuvre.

Fortunately for operators, a number of solutions are on the market. For example, Mercedes-Benz Trucks introduced its Sideguard Assist safety system on the latest Actros to help drivers detect moving or stationary objects in the monitoring zone along the nearside of the truck. 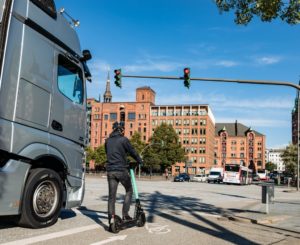 The Mercedes-Benz Sideguard Assist has the ability to detect moving or stationary objects in the monitoring zone along the nearside of the truck. Those objects may include pedestrians, cyclists, road signs or even e-scooters.

Sideguard Assist is fully integrated into the vehicle architecture and can be retrofitted in numerous ex-factory Actros and Arocs model variants. Furthermore, the system works for both rigid vehicles and entire vehicle combinations up to 18.75m in length.

Meanwhile, DAF has made available factory-fitted camera and sensor system in its CF and XF tractors and rigids to comply with the minimum one-star standard requirement. Developed in partnership with Brigade Electronics, equipment comprises a near-side mounted camera with in-cab monitor, nearside proximity sensors and an audible left-turn signal for when the left-turn indicator is activated. An optional rear-mounted reversing camera is also available.

According to Alina Tuerk, planning and strategy manager for DVS at TfL, operators of zero-star vehicles can expect to spend up to £2,000 on the required equipment. But just how many vehicles does TfL anticipate will need to make this investment? 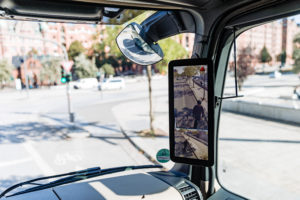 “Based on camera data, we calculate that as many as 225,000 unique vehicles enter London over the course of 12 months,” says Tuerk. “Since October 2019 we’ve issued just under 7,000 permits, of which just over 60% meet one-star or higher, from either having adequate direct vision already or from technology installed inside the vehicle that improves the driver’s indirect vision.”

This suggests there’s still much work to be done in the forthcoming eight months to ensure all vehicles entering London are DVS-compliant. But rather than forcing businesses to splash the cash on new tech, Tuerk believes the scheme might force firm to rethink their transport strategies altogether.

“Operations may well restructure the way they use their vehicles. For example, a company that currently sends five vehicles into London at the moment may send just one in that meets not only the DVS requirement but also the low emission zone requirement.

“I don’t think we will be at the point of issuing that may permits, but we encourage people to apply early, especially zero-star permit applications, which require some evidence of the technologies fitted.”