Logistics Capital Partners has teamed up with German developer and asset manager Dietz to launch a 1.3 million sq ft XXL warehouse development in Roosendaal, the Netherlands.

To be known as Campu 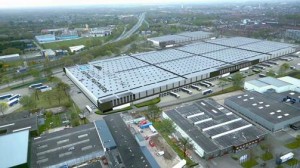 s A58 the scheme allows for parking for up to 790 cars and 119 lorries depending on the selected layout, as well as associated infrastructure. Current zoning allows for a building height of up to 20m, offering a wide variety of solutions on customer requirements.

It is strategically located near the ports of Rotterdam and Antwerp and at the crossroads of two major motorways that connect to the rest of mainland Europe.

Thijs van de Meulengraaf of JLL said: “Land plots of this size are exceedingly scarce throughout Europe, especially in areas such as Roosendaal.”

It will be ready for construction in January 2017, with expected occupancy later in the year. JLL and CBRE have been jointly appointed to letting agents.