Mercedes Benz has unveiled a 26-tonne electric truck, and reckons it is a first for vehicles of this weight. 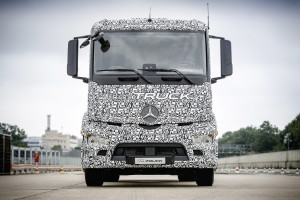 The Urban eTruck has a range of up to 200 kilometres and a load capacity comparable with diesel.

It is based on a heavy-duty, three-axle short-radius Mercedes-Benz distribution truck.

The entire conventional drivetrain has been replaced by an electrically driven rear axle with electric motors directly adjacent to the wheel hubs. This is derived from the electric rear axle which was developed for the Mercedes-Benz Citaro hybrid bus.

The power is supplied by a battery pack consisting of three lithium-ion battery modules.

This results in a range of up to 200 km – enough for a typical daily delivery tour. The integrated concept with motors adjacent to the wheel hubs, allows the batteries to be housed in a crash-proof location inside the frame. 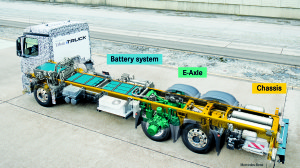 Stefan Buchner, head of Mercedes-Benz Trucks said: “With the Mercedes-Benz Urban eTruck, we are underlining our intention to systematically developing the electric drive in trucks to series production maturity. This means that we will begin to integrate customers, so as to gain valuable joint experience with respect to the operating ranges and the charging infrastructure in daily transport operations. Because we think the entry of this technology into the series production is already conceivable at the beginning of the next decade.”

In the light distribution sector, Daimler Trucks has been running customer trials of the Fuso Canter E-Cell since 2014. The trucks covered more than 50,000 km within one year. In the process the vehicles were locally emission-free and, taking power generation into account, reduced CO2 emissions by 37 per cent compared to diesel engines. The operating costs were 64 per cent lower on average.

Dr Wolfgang Bernhard, responsible for Daimler Trucks & Buses at the board of management, said the time is now ripe for the electric truck in the distribution sector.

“With the Mercedes-Benz Urban eTruck, we are now electrifying the heavy distribution segment up to 26 tonnes. We intend to establish electric driving as systematically as autonomous and connected driving.”