Argos made an operating profit of £83.1 million in the year to 27 February – down from £129.2m the year before, Home Retail Group has revealed in its annual results. 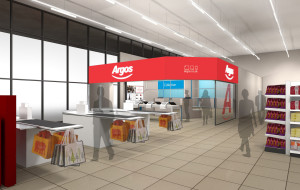 The group, which has recommended a takeover offer by Sainsbury’s, said it had taken a goodwill impairment of £852m as a result of the offer – and this meant that it reported a total loss after tax of £808m.

During the year, Argos completed the national roll-out of Fast Track for both same-day home delivery and store collection, and it opened 94 digital concessions and collection points, taking the total number to 114.

Home Retail Group completed the sale of Homebase for £340m on 27 February.

CEO John Walden said: “The past year has been a landmark period for the Group, during which we have completed the sale of Homebase and recommended to shareholders the offer from J Sainsbury plc for the acquisition of the remaining Group, principally Argos. I am pleased that, with its offer for Home Retail Group, Sainsbury’s has recognised the good progress we have made in transforming Argos into a digital retail leader.

“During the year we continued to progress the Argos Transformation Plan, including the introduction of Fast Track, which offer market-leading propositions for both same-day home delivery and store collection. We have been encouraged by the customer response to Fast Track with our on-time delivery rates and customer satisfaction having continued to improve to leading levels. Argos also now has a proven digital store model, including small formats and concessions, which require lower capital outlay and provide customers with fast access to an expanded product range regardless of store stock capacity.”