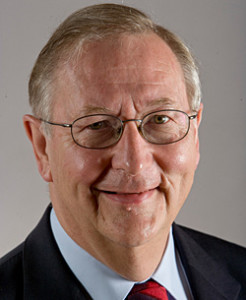 Quarmby was distribution director at Sainsbury’s before going on to become joint managing director, and was president of the Institute of Logistics in the 1990s. Since 1996 his appointments have included chairman of the Strategic Rail Authority and of the Docklands Light Railway, and board member of Transport for London.

He is chairman of the Canal and River Trust’s Freight Advisory Group and led the development of a policy for waterborne freight and the commercial waterways, since adopted by CRT in 2014.

He succeeds the late Sonia Rolt as president of the CBOA. “We are delighted that David has agreed to take on this role for three years. I know he will wish to be more than a ‘figurehead’ and will be getting out and about on freight boats and barges of all sizes, on the various UK waterways used for water freight. David’s expertise and wisdom will be of great benefit to the association as it seeks to support its member companies and the navigation authorities and ports in the drive to attract more tonnage to the inland waterways,” said CBOA chairman David Lowe.

David Quarmby said “It is a great honour to be associated with CBOA as its president. I have huge respect for its members’ knowledge and experience of our waterways, and I look forward to working with them to help bring more traffic on to the UK’s inland waterways”.

Quarmby also is leading a two-year study, on behalf of the Rees Jeffreys Road Fund, developing a vision for England’s major road network to 2040.