Renault Trucks aims to cut the fuel consumption of distribution vehicles by 13 per cent with the Efficient Distribution Truck (EDIT) project.

It is working with six partners to develop a reefer truck using technologies that will be commercially available by 2020.

The prototype vehicle will be based on a Renault Trucks D Wide Euro 6 with a refrigerated body.

Key areas of research include the aerodynamics of the vehicle and refrigerated body which will be thoroughly revised.

The prototype will be fitted with a low voltage macro-hybrid system which will recover some of the braking energy via a reversible electric system. This will be used to power auxiliary equipment with recovered electrical energy and can also provide occasional support to the internal combustion engine. 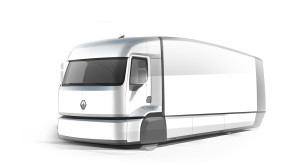 The project will also include development of a new driving aid system. It is to be connected to traffic lights and able to detect when they will change, so as to define a speed profile minimising fuel consumption.

It will also allow drivers to choose the most economic itinerary for their truck. Finally, the prototype will be testing new tyres with a lower rolling resistance coefficient. The EDIT project is scheduled to end with the delivery of the first vehicle in 2018.

Renault believe that the project should lead to new market openings for distribution vehicles in Europe.