Roger Burnley has been appointed president and chief executive of Asda – starting from 1 January 2018. Burnley has a strong background in retail supply chain, having had a number of key roles in the field. 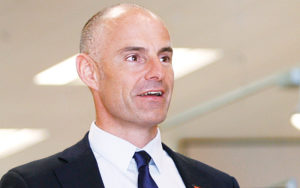 He will take over from Sean Clarke.

Burnley began his career in the retail sector as a graduate at B&Q where he held several roles across buying and logistics and retail management. He then moved to Asda as director of supply; following this he moved to Matalan where he became supply chain director. He then held the same role at Sainsbury’s – and over the next decade took on a range of roles, including: retail and logistics director, managing director of general merchandise, clothing and logistics, and most recently retail and operations director.

“Asda is a great business and we’ve started to realise its potential again,” said Burnley. “Sean’s focus on serving customers and simplifying the business has established a firm foundation on which we can build.

“Since I returned to Asda last year, I have been encouraged by the passion and professionalism of our colleagues and look forward to leading this terrific team.”

Current CEO and president Sean Clarke, said: “Asda is moving in the right direction but there is still much more for us to do. I am excited to see the momentum continue under Roger’s leadership. Walmart has given me and my family some great opportunities. I am looking forward to taking some time out but I will always stay connected to the company.”