Royal Mail is rolling out 190 electric vans in London and the South East to add to the 100 that it already operates in the UK.

The new vans have a green livery rather than the traditional red. 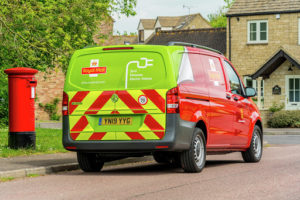 The mix of Mercedes-Benz eVito and Peugeot Partner vans are charged via wall or floor mounted charging posts.

Load capacities ranging from 3.7 cu m to 6.3 cu m, the vehicles will operate as part of usual delivery routes.

They will be launched during July across selected locations in London and the South East including Whitechapel, Islington, Bexleyheath, Dartford and Orpington in Kent.

This latest move is part of Royal Mail’s involvement in the Optimise Prime project, the electric vehicle demonstrator led by Hitachi Vantara and UK Power Networks. The project brings together power, technology, fleet and transport companies – including SSEN, Uber and Centrica – to test and implement the best approaches to the EV rollout for commercial enterprises.

Royal Mail fleet director Paul Gatti said: “This trial is part of a programme of initiatives across our business that will ensure we can continue to deliver letters and parcels safely, efficiently and in the most environmentally-friendly way possible.”

The company said it has reduced its overall carbon emissions by 29 per cent since 2004, while its “Feet on the Street” network of 90,000 postmen and women plays a key role in keeping its carbon emissions low.