The company behind a plan to create a freight airport at Manston in Kent has vowed to push on with the project despite a report for Thanet Council that said it would not be financially viable. 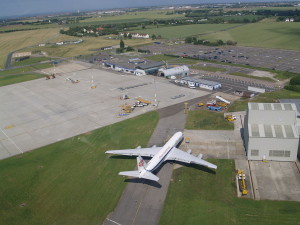 RiverOak Investments said it “will be continuing to develop its exciting plans for Manston Airport” and it called on the council not to make a decision on the future of the site until it had seen RiverOak’s evidence.

It argued that the report produced by Avia Solutions “does not offer any opinion about the reasonableness or otherwise of RiverOak’s commercial plans for the airport” making the report irrelevant.

Manston closed in May 2014. Since then the owner of the site, Stone Hill Park, has put forward plans for a mixed residential, employment and leisure development.

RiverOak has put forward a plan that would see Manston developed as a specialist freight airport.

The Avia report pointed out that during its years of operation as a commercial airport, Manston had a range of air services to domestic and short haul Europe points, and handled around 30,000 tonnes of freight a year, almost exclusively imports of fresh produce coming on dedicated freighter aircraft.

Avia concluded that there is limited interest from the air cargo industry in using a re-opened Manston Airport for air freight.

However, in a statement, RiverOak said Avia’s report “ignores the ample evidence from at least eight respected studies by the likes of Transport for London, the Centre for Economic and Business Research, Boeing and Oxford Economics, that air freight traffic levels in the UK are severely constrained due to the lack of runway capacity and there is enough demand to satisfy not only a thriving Manston in the future but also, in due course, a third runway at Heathrow too.

“RiverOak’s own consultant has carried out 17 interviews and counting, all positive, the results of which will be published in due course. We therefore recommend that Thanet Council waits to see the evidence that forms part of our application before reaching any conclusions on the viability of Manston Airport as a cargo hub.”