Deutsche Post DHL recorded the strongest third quarter in its history increasing operating profit to €834m from €755m in 2016. 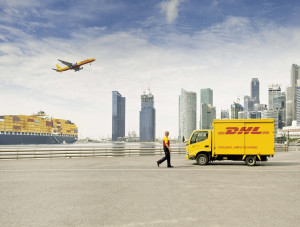 Operating profit in DHL Supply Chain climbed by eight per cent to €148m for the quarter, reflecting not only growth in new business, but also the impact of the division’s optimisation programme aimed at improving the EBIT margin to between four per cent and five per cent by 2020. At 4.2 per cent, the third-quarter margin was within the target corridor.

Revenue in Supply Chain division increased by 2.3 per cent to €3.5 bn in the third quarter. Organically, revenue grew by 6.1 per cent over the prior-year quarter. The division concluded additional contracts with a total volume of €415m with both new and existing customers during the third quarter.

In the Express division operating profit grew by 10.4 per cent to €372m on the back of strict yield management and continuous improvements in the network. Revenue rose by 8.5 per cent on the prior year to €3.6 bn. The operating margin rose to 10.2 per cent, up from 10.0 per cent a year earlier.

Revenue in the Global Forwarding, Freight division was up 5.1 per cent to €3.5 bn in the third quarter of 2017. The division’s EBIT increased by 6.3 per cent to €67m. The group said the upward trend showed that the measures initiated to increase profitability were taking effect.

The group highlighted the impact of UK Mail’s contribution to the Parcel Europe operation. UK Mail, which was acquired in December last year, contributed €125m revenue in the third quarter.

Parcel Europe now has operations in 26 countries after the recent expansion of its activities to include the Bulgarian, Irish, Croatian and Romanian markets, and it intends to operate throughout Europe by the end of 2018.

Group chief executive Frank Appel said: “All divisions of our company registered growth thanks to our strategic focus on rapidly expanding sectors such as international e-commerce. By investing in the future and developing ground-breaking innovations, we are continuously expanding our market-leading position.

“For the fourth quarter, we anticipate a strong Christmas season and are confident that we will attain our targets for the full year.”