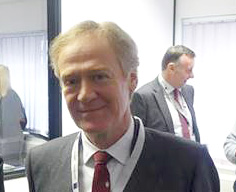 The vast majority of attendees at the RTITB launch, all from the road haulage industry, were either unaware of the legislation, which was made public in December, or had not read it.

But Jones said that with the legislation’s new format, trainers should be aware of it because it is a “very useful guide”. He warned that if the guidance isn’t followed by drivers, they could face serious consequences.

“I strongly recommend you all look at this document,” said Jones at the launch. “A traffic commissioner is not a court, we take action, drivers must be made aware of the consequences of their actions.

“I expect employers to dismiss drivers who have falsified documents.”

Jones said that drivers sometimes don’t appreciate how serious an offence is – but that the amended document outlines the severity of different offences.

Jones used the example of a driver using someone else’s driver card to demonstrate this. He said that if this offence was taken to a magistrate’s court the offender might get a £50 fine – but warned that if the case was handled by a traffic commissioner, their licence might be revoked for a year.

The legislation itself says that while criminal courts are concerned with punishing for criminal offences – the role of the traffic commissioner is to determine whether or not a driver is fit to obtain or continue to hold a licence.

The handling of falsified records outlined in the document demonstrates the severity of the penalties a driver could face:

‘Traffic commissioners are likely to regard the falsification as more serious than the offence that it may be designed to conceal. Those who commit offences of this kind must understand that there will be serious consequences if and when the matter comes to light. A cumulative and significant period of disqualification which reflects the offence that has been subject to concealment, the falsification of records and/or use of a manipulation device, is the likely outcome. Subsequent conduct is also likely to be of limited weight.’

The legislation also provides detailed examples of specific cases and their consequences, including drivers using devices while driving, and drug/alcohol related offences.